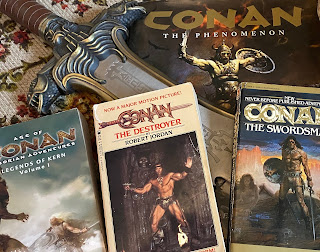 I cherish the literary art of Robert E. Howard (1906-1936). I judge Howard as one of the greatest writers of all time. His sword and sorcery stories of Solomon Kane, Kull, and Conan the Cimmerian are a major influence on many of the forms of art and entertainment that have enriched my life, such as fantasy roleplaying, video games, film, and other examples of other popular culture.

I am not quite long in the tooth as a member of Robert E. Howard fandom. My official engagement with REH fandom began in 2006, when I presented an academic paper on Howard at the Southwest PCA/ACA conference. But my thirteen years are not impressive compared to others, who have been at it for much longer. So, keep the nearsightedness of my perspective in mind as you continue reading.

In this post, I explore a lesson learned while participating in both Robert E. Howard fandom and the burgeoning academic community that studies pulp fiction. It's a lesson I find myself rehearsing to  friends and students who express interest in Robert E. Howard. Writing this lesson down will provide a useful reference. You might be reading this because I recommended it to you. Let me frontload my point: if you're interested in Robert E. Howard, read his original works first, and share those originals with others first, but, for Crom's sake, don't become (too much of) a snob.

The Myth of the "Pure" Text

The REH fan community contributes to (and even intellectually subsidizes) the small scholarly community orbiting REH and pulp studies. The fan community has done and continues to do a lot of foundational work that is a necessary condition for scholarly work. For example, literary scholars can't make discursively valid claims about literary art unless they are sure they are working with something like a "definitive" text. This is not say literary scholars don't work with "flawed" texts. Some do. For example, there are two versions of Mary Shelley's Frankenstein, the 1818 and the 1831 editions, and there are several variations in each version. There is not an "agreed upon" text that scholars study and teach with; however, every scholar working on this work acknowledges which text they are working with and spends a little time discussing why they are using that specific text. In general, the idea isn't that one should be using a "definitive, pure text" (aside from an original manuscript, such a thing probably is a myth); instead, the idea is that one should be fully aware of the textual history of the works and editions one is studying.

Put another way, there is no such thing as a "pure" text; however, there needs to be something like a consensus about what texts we are going to be talking about to proceed. It has an ambivalent backstory, but, by happenstance, this work has been done in Robert E. Howard fandom. Here's the story in a nutshell.

Before the 2000s, there was a big problem: an interested yet uninitiated reader would have had difficulty finding an unedited version of Howard's original stories outside of the old, collectible pulp magazines (and even these might have editorial interventions--title changes, censoring scenes considered too risqué, etc.). The only other editions available were, arguably, flawed, difficult to locate, or incomplete. But there were Howard stories available.

The sword and sorcery writer, L. Sprague de Camp, edited all of Howard's Conan stories together in the so-called "Lancer Editions" (1966-1977), but he used a heavy hand (to put it mildly) in compiling them. He tried to put them in "chronological order," and he "filled in the gaps" where he thought Howard failed at world building and narrative cohesion.

It doesn't take a literary scholar to realize that such heavy-handed editing is problematic. The jury is still out regarding de Camp's legacy. There are compelling arguments about how de Camp did a lot for Howard's legacy by popularizing him (or at least the character "Conan"). Others will argue that de Camp didn't popularize Howard so much as provide a distorted and distracting caricature version of Howard who suited the sensationalistic needs of marketability, and this caricature representation endures and ramifies in negative ways. This is a long, protracted debate filled with potholes and landmines, so I won't get into it here.

Suffice it to say, the idea that there are "correct," "unadulterated" versions of Howard's stories, more in sync with the author's original vision, has, to a large extent, disseminated through the REH community, and this was because of the hard work of fans and independent experts and not, to my mind, academic, tenure-minded scholars.

But let's back up.

A few decades after the writer's suicide in 1936, Robert E. Howard, the writer, as well as his works (in a variety of genres), were overshadowed by its associated popular culture exuda. By the late-1960s and early-1970s, my impression is that a fair amount of people knew about Conan the Barbarian (although I wasn't around then), but they associated the figure with the Frazetta illustrations of the Lancer editions, the Marvel Comic's character, or, into the 80s, the Arnold Schwarzenegger depiction. In other subcultures, Howard's influence endured. Fantasy RPG gamers glorified Conan in an Advanced Dungeons and Dragons context, but the extent to which the grim, paranoid atmospherics of the game were linked to Howard's unique sword and sorcery vision was ignored or under acknowledged.

So, for the past twenty some years, Robert E. Howard enthusiasts have been keen to unravel Howard's literary legacy from his popular culture manifestations.

When I decided to get serious, I spent a large portion of 2006 to 2009 mentally unravelling all this for myself; and I benefited from the work of several before me. It took attending several panels at pulp and science fiction conventions, reading several biographies and articles, and having many conversations, to do it, and my view of Howard is still probably contaminated by sensationalistic framings. By and by, I got it through my head that there is an "Ur-source" of Howard, the actual literary art produced by the writer himself, and, in emanating, ever-widening concentric rings outward, a whole universe of REH-inspired fare: comics, films, pulp sword and sorcery novels, television shows, roleplaying games, video games.

A lot of people have been trying to return to Howard's original texts, to undo the distorting editorializing and obfuscation that comes with popular culture visibility and unscrupulous editors.

More and more, however, I have been giving thought to this intellectual habit of mind. Let me explain.

I began participating in Howard fandom after this move to discover a more pure, literary Howard.  But, truth be told, what brought me into Howard fandom was one of those popular culture texts so often ridiculed and critiqued by true Howard fans, e.g.. John Milius' cult classic, Conan the Barbarian (1982). I enjoy this movie and I still do, although it provides the irony-tinged joy of "camp." I read and re-read the decently-written novelization L. Sprague de Camp and Lin Carter. I blare Basil Poledouris' film soundtrack while working out. In 2010 my wife gifted me a prop replica of the Atlantean sword. It now hangs proudly in the dining room. I even watch (and vaguely enjoy) the sequel to Milius' film, Conan the Destroyer (1984). This is a hard one to admit: I get a kick out of the cartoon series, Conan the Adventurer (1992-1993). But, through a lot of reading, I was able to demarcate the Milius' film, comics, and cartoons from the actual literary art produced by Howard.

By analogy, to compare the actual literary artistic works to their popular culture exuda is like comparing Dante Alighieri's The Inferno to, for example, the famous illustrations of the poem by Gustave Doré', the Dantean hell rendered in "Red Hot Homma" (1934) starring Betty Boop, and other popular culture depictions of hell (which were first encoded by Dante). The point is, powerful art begets more art (and quasi-art); some of that begotten art is better than others. Some is ephemera. Some rises to the level of art. This is not to say I think that Conan the Barbarian (1982) is art. Most of the popular culture reacting to Howard's work has been ephemera, and some of is delightful; however, who would argue with the idea that Franz Frazetta's illustrations will withstand the test of time, have already achieved a level of artistic autonomy?

My Descent into and Ascent from Snobbery

Through an incremental process too long to rehearse, I learned how to make distinctions like this, i.e. who Robert E. Howard was, what he did, and what he did not do. There was a great bookstore in Muncie, Indiana where, in early 2005, an old bearded guy with a pipe instructed me on who Howard was and what editions to read. By and by, I  discovered Howard's original works, and came to understood how distinct they are from the works they influenced.

But then my foot slipped and I became something of a snob. I came to avoid Robert E. Howard popular culture texts like the plague. From my newly "enlightened" perspective, they were offensive corruptions of Howard's authorial vision, distortions of his world, pale shadows of the original, true literary art. At the height of this snobbery, I sold my complete files of Savage Sword of Conan  and Conan the Barbarian in a parking lot in Cleveland, Ohio because I had a short-term financial need. I really regret that now.

I've changed somewhat. In addition to other influences, it took a video game, an MMORPG, to do that. In 2006, Age of Conan, was released, and the rumors were that the creators were making every effort to  be faithful to Howard's vision. The jury is still out regarding their success. Like a lot of Howard fans, I was hypnotized by the idea of the game, and I built a gaming computer specifically to play AoC. I cancelled my World of Warcraft account and played AoC for a full year and half.  I maxed out my character, a Cimmerian barbarian named Malabolj. But then I got busy with graduate school and adjuncting work, and I so quit playing. But AoC was an experience, I dare say an artistic experience.

Although Age of Conan is a small and community now, in my estimation, the game is a loving homage to Robert E. Howard's vision. Although the game is a tendentious interpretation of Howard, it truly does capture facets and flashes of Howard's aesthetic and philosophical concerns. And the soundtrack, by composer Knut Avenstroup Haugen, is a true work of art, one of the best video game soundtracks I've ever listened to. It's on YouTube. Give the first track, "The Dreaming," a listen, and be amazed.

A Conclusion, and a Question

Over time, even as my Del Rey editions of Howard are falling apart at the seams due to the amount of re-reading, I have craved more and more Howard-related fare. A desire to read more of an author despite the paucity is an indication of that author's power. We come to love living in, virtually occupying, a writer's world so much we want to hang out there longer and longer. More importantly, this feeling, this craving, often becomes a powerful compulsion to create new art.

This is a long way of saying that, in 2020, I am allowing myself to read "pastiches" of Conan, but I will do so with a kind of hospitable but critical mindset.

The tension and question, which I still haven't resolved, is how to do you pay respect to a fantasy author's vision while also joyfully expanding, dwelling in, and exploring their world that unfolds dynamically due to fan engagement?

A question for another time.