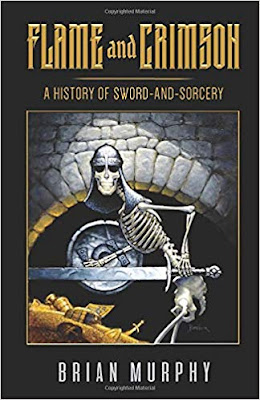 On the way to inventing the fantasy subgenre of "sword and sorcery" (S&S), Robert E. Howard crafted the quasi-S&S hero, Solomon Kane, a brooding, puritanical demon hunter, bane of zombies, vampires, and other supernatural horrors. With the first Solomon Kane story, Howard mixed genres like a manic alchemist raiding his reagent cabinet: he combined historical fiction, swashbuckling adventure, and supernatural horror. Indeed, this modernistic hybridization of genre tabooed the first Solomon Kane story for many pulp editors. Consider the famous Solomon Kane rejection letter Howard received from the editor of Argosy: "In some ways this story is very good, and in others it is rotten [...]. It starts out as a period story, & finally changes into a combination of modern & medieval African jungle story. You can't mix periods & atmospheres like that. Stick to one or the other" (qtd. in The Robert E. Howard Guide [Skelos P, 2019] 68). This rejection didn't discourage Howard too much. Many speculate the rejection motivated Howard to submit the story to Weird Tales, the pulp where he would pioneer the S&S genre. Patrice Louinet, commenting on the Argosy rejection and subsequent acceptance by Weird Tales, speculates, "Howard had understood or at least felt that the strength of his character resides precisely in this total scorn of established conventions" (69).

It's an old story worth rehearsing briefly: Howard would go on write several Solomon Kane stories. Later, elements of the Kane stories, specifically the mixture of swashbuckling adventure with supernaturalism, would be incorporated in the Kull of Atlantis stories. By and by, Kull of Atlantis, through revision, would morph into Howard's most enduring creation, Conan the Cimmerian, the character whose world and adventures would become the "Ur-source" of the genre of S&S.

From a certain perspective, S&S began with rejection.

"Sword and sorcery." Readers react to the term in a variety of ways. The genre is often the locus of critical paradox: (1) proto-feminist and sexist, (2) a form of modernist experimentation and formulaic pulp entertainment, (4) distinctively literary and ephemeral popular culture, an unpretentious multimedia phenomenon incorporating RPGs, music, and video games.

The story of S&S is, to put it mildly, complicated.

Here's a key theme: some criticize S&S for its conventionalism, its reliance upon a hackneyed formula. Shorn of all story incidentals, the spine of a typical S&S tale looks like this: a male barbarian faces off against a sorcerer in order to win a woman-as-prize. Seen in this light, it's hard to take S&S too seriously. Consider, for example, Brian Hval's lamentation along these grounds, published in the April 1970 issue of the S&S fanzine, Amra: "I have finally been exhausted by the same repetitious plots of half-naked barbarians chasing equally naked women through numberless perils, the entire series of episodes menaced by some slimy Elder Evil. [...] All brainless boozing barbarians!" (qtd. in Murphy 171). With this view of the genre in mind, it is sobering to recall that it began as genre defined by its generic formlessness.

Brian Murphy's Flame and Crimson: A History of Sword-and-Sorcery (Pulp Hero Press, 2020), begins to wrestle with this story. Flame and Crimson is a much-needed survey of this venerable yet vivacious subgenre of fantasy literature. The book does more, however, than chronologically laying out the rise, development, decline, and (ongoing) rebirth of S&S. It lodges a compelling defense of S&S's enduring cultural significance in modernity; it provides an insightful description of its conventions and distinguishing features, and begins to connect the subgenre to its (often lamented) multimedia uptake in music, film, and gaming.

Who is it written for? This book will be valuable to experts, casual fans, and newcomers alike. Experts might find a few chapters superficial and thin; casual fans might find some chapters technical and over-detailed; newcomers might wonder what all the fuss is about. But if you're interested in S&S--despite where you are coming from--this book is required reading.

Below are a few of the reasons why.

Although it is written for a deep reader of fantasy, it does not assume that the reader knows everything there is to know about S&S already. It evinces a journalistic style: it is accessible, hospitable, and avoids the insular language of the academic. This is because it is truly an introductory survey.

The opening chapters distinguishes S&S from other traditions of fantasy in a valid and thoughtful way. It goes on to treats all the major authors of S&S. I'm anticipating later reviews of the book that decry that certain writers didn't get treatment (or deeper treatment).

If there is anything controversial here, then it is in its treatment of L. Sprague de Camp, the editor and ambassador of Howard's Conan the Cimmerian character and critical standard bearer for S&S. Murphy treads lightly. He doesn't strictly condemn de Camp for his 1970s characterization of S&S as escapist, unpretentious, and anti-intellectual entertainment. He neutrally recounts how and why de Camp held this view: for de Camp, hewing to convention was part of S&S's appeal. Although one gets the sense that Murphy disagrees with de Camp in part, he doesn't use his book as a basis for editorially decrying de Camp. Instead, he simply lays out the de Camp story and gets the reader to consider his ambiguous role in the history of the subgenre: de Camp was a popularizer whose influence had good and bad consequences. Although many have formed negative opinions of de Camp due to his biographical distortions of Howard's life in Dark Valley Destiny, the infamous Howard bio, Murphy's steady approach is nevertheless admirable.

Murphy also discusses the S&S renaissance that is ongoing. Murphy hits on all the major players: DMR Books, Rogues Blades Entertainment, From the Magician's Skull, Heroic Fantasy Quarterly. He also briefly talks about Grimdark and its tangential relationship to S&S. I'm sure writers currently participating in the S&S renaissance would have preferred a longer treatment of their movement or favorite writers; however, Murphy's book is part of that same phenomenon. It will probably emerge as the "go-to" critical companion to the S&S revival.

There are some elements of the book worth quibbling with: the chapter on Robert E. Howard seemed unambitious from a literary criticism perspective. That chapter seemed to assume Howard's uncontested centrality in the genre and rehearsed previous arguments deployed elsewhere. One can't blame Murphy's treatment of Howard here. He clearly knows his Howard and perhaps didn't want to go over old territory. Indeed, he writes about Howard with precision. It would have been interesting to hear novel speculations about Howard's critical significance. But this chapter is less a new theory of Howard and more a restatement of previous arguments about Howard's centrality to the subgenre.

There is an enthralling chapter on the cultural impact of S&S, wherein Murphy discusses S&S's uptake in other genres and medias. This chapter was extremely interesting but it seemed only a cursory treatment of an otherwise massive archive of pop culture that fans of S&S haven't even begun to come to terms with. For example, there is mention of R.A. Salvatore and his Drizzt Do'Urden novels, for example. But what about the stacks and stacks of mass market paperback game tie-in novels? (The Warhammer Fantasy characters, Gotrek and Felix, for example, are an homage to Fafhrd and the Grey Mouser and Conan). A longer treatment of S&S as a multimedia phenomenon is needed. Central to this is the way S&S's narrative conventions have become central to Dungeons and Dragons, which, despite your stance towards the game, is the main way most experience the genre, its conventions, its atmospherics, and thematic concerns. D&D should be viewed as a literary wellspring because it has become the major engine (for good or ill) of new adventure fantasy fiction.  Murphy has struck new territory with this chapter.

To summarize: this book is excellent. It is the beginning of a long overdue, serious, and honest appraisal of the S&S subgenre. S&S is sometimes simplistically decried as a genre of anti-intellectualism, misogyny, and ideological insularity, but it doesn't come through as that caricature here. Murphy renders a vital genre where many of the concerns about a distinctively modern human experience are explored . One begins this book expecting it to be a history, a recounting of bygone days, a record of what has happened. It ends, however, with an emphasis on the S&S revival, on the future. It's an exciting turn.

Let me conclude by citing the opening of Robert E. Howard's first professional sale, "Spear and Fang" (Weird Tales, July 1925). The narrator is describing a premodern human, an "Ur-artist," trying his hand at artistic expression: "With a piece of flint he scratched the outline and then with a twig dipped in ocher paint completed the figure. The result was crude, but gave evidence of real artistic genius, struggling for expression." This image reminds me of S&S. S&S, too, is sometimes crude, but in Flame and Crimson, Brian Murphy reminds us that, more than you would expect, it gives evidence of real artistic genius struggling for a voice.