Six New Anthologies of Sword and Sorcery in 2020 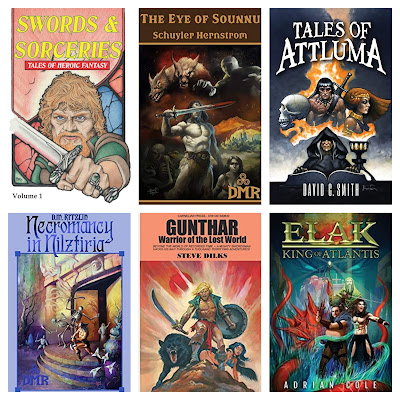 2020 was a great year for sword and sorcery. Here are reviews of six new anthologies.

The Eye of Sounnu, by Schuyler Hernstrom. An eclectic anthology of innovative sword and sorcery tales. The anthology begins with the genre-conventional yet vital sword and sorcery adventure, "The Gift of the Ob-Men," that is nevertheless a masterpiece. "The Tragedy of Thurn" is a compressed story in the spirit of REH's Kull stories (very mystical and philosophical in probing the boundaries of how we define reality). "Images of the Goddess" is cleary inspired by Jack Vance and perhaps Lin Carter: humorous, serendipitous, bizzare, irreverent. "The Space Witch" is a vignette with lyrical wordplay and beautiful imagery. "The First American" is a compelling sword and sorcery and time travel / speculative fiction tale, with some Richard Matheson vibes. "The Law of the Wolves" was the most overtly literary, a brief meditation on how savagery is the bedrock of existence. "Mortu and Kyrus in the White City" was a paranoid sword and sorcery, perhaps in the spirit of Fritz Leiber's skulduggery tales in Lankhmar. "The Star-God's Grave" was amazing: Burroughs-like space opera (i.e. sword and planet) in its essence, thoroughly entertaining. This anthology will clearly be remembered as a classic.

Elak, King of Atlantis, by Adrian Cole. An excellent new work of pulp sword and sorcery pastiche. The anthology consists of four short stories and one novella. "Blood of the Moon" was an intriguing underworld adventure that features stirring elder gods. "Witch Queen of the Doom Island" is a bizarre, quasi-Gothic spectacle, and there were times where it put me in mind of some of the imagery of Coleridge's "The Rime of the Ancient Mariner." Revenge of the Sorcerer" was an interesting villain-focused tale, with a tense climax. "Spawn of the Sea God" was a kind of espionage, skulduggery mystery with paranoid atmosphere combined with swordplay and adventure. The novella, "Sky Warriors of Atlantis," was quite ambitious with a complicated plot being revealed throughout. There are also great interior illustrations.

Tales of Attluma, by David C. Smith. This is an intriguing anthology of sword and sorcery stories set in Attluma, the same secondary world explored in Smith's novels Oron and The Sorcerer's Shadow. That is neither here nor there because the anthology and stories contained are autonomous and cohesive; one doesn't have to have read *Oron* or Smith's other sword and sorcery works to enjoy these. There are some true gems here. Consider this passage from "The Return to Hell": "Frozen and breathless, he had looked into deeps of ageless wonder full of dark stars [...]." Passages like this stir the imagination. There are so many great stories. Many are a few, gut-punch pages, and are therefore compressed and precise forward momentum stories that have been clearly sharpened (I am reminded of Poe's "Philosophy of Composition," where Poe states that the short form should maximize literary effect in one "sitting"). "Dark of Heart" is a sword and sorcery masterpiece, a true specimen of the genre.

Gunthar: Warrior of the Lost World, by Steve Dilks. This is great, old school sword and sorcery in the 1970s, Lin Carter and Gardner F. Fox, vein. The joy of this anthology is not how it experiments with the genre but in how it gives a spark of vitality to a specific period of the genre again, i.e. the S&S of the 1970s. A collection of novellas, a standout was "Lord of the Black Throne," specifically its phantasmagoric ending, a montage of sword and sorcery images that recalled psychedelic, blacklight-illumined velvet paintings of sorcerers and warriors battling at the end of time in cosmic depths, or the airbrush tableaus of eldritch skullduggery on 1970s custom vans. The cover art painting by Regis Moulton is great, and the rough-edged interior ink illustrations by Steve Lines perfectly harmonize with the stories. If you enjoy Thongor, Brak, and Kyrik, you will enjoy the adventures of Gunthar, Warrior of the Lost World.

Necromancy in Nilztiria, by D.M. Ritzlin. Disclaimer: this is a sword and sorcery anthology written by a key publisher of new sword and sorcery, so it has a "meta" quality to it; the anthology is in conversation with the sword and sorcery tradition that has come before. Ritzlin has clearly read widely and deeply in sword and sorcery fiction, and much of this incorporates and responds to those influences. You don't have to be a sword and sorcery mega-fan to enjoy this, but it helps. Major influences, I speculate, are Robert E. Howard, Clark Ashton Smith, Fritz Leiber, Jack Vance (specifically the "Cugel the Clever" stories), L. Sprague de Camp's Tritonian Ring, Gardner F. Fox's Kyrik tales, and more. As T.S. Eliot reminds us in "Tradition and the Individual Talent," "No poet, no artist of any art, has his complete meaning alone." This principle is specifically true in a compressed and proscribed literary tradition like sword and sorcery. To summarize: this is a rich, fun, sometimes challenging, ambitious, memorable read, rich with unresolved tension: artful and puerile, serious and playful, conventional and transgressive.

Swords & Sorceries: Tales of Heroic Fantasy, edited by David A. Riley. This is an entertaining anthology of new sword and sorcery with a diverse range of unique tales. The first story, "The Mirror of Torjan Súl," is lyrical and bizarre in the spirit of Clark Ashton Smith. "The Horror from the Stars" features an intriguing sword and sorcery villain, a cosmic horror "body snatcher." "Trolls are Different" is not conventional sword and sorcery but nevertheless a compelling tale about defeating enemies via "poisoned hospitality." "Chain of Command" was excellent; it is humorous and vital sword and sorcery that features a duo who evoke Fafhrd and the Gray Mouser. "Disruption of Destiny" was the most self-consciously literary story and reminded me of LeGuin's "Earthsea" short fiction. This one was quite moving. "The City of Silence" is an intriguing sword and sorcery political allegory that features an exiled king and his compassionate and loyal vizier. "Red" was a crime/quest narrative: very eclectic approach to S&S" with an accelerated ending. "The Reconstructed God" is uniquely written from the p.o.v. of a "familiar," a creature who serves a Power, usually a sorcerer; this tale one was quite atmospheric and the fantasy setting was vivid. All in all, an entertaining and fresh new anthology of sword and sorcery! Jim Pitts's cover is really distinctive; moreover, his interior illustrations are delightfully eerie, otherworldly, and evoke that "old school" charm.